Is There a Link Between Obesity and Acid Reflux?

Obesity is a serious medical condition caused by excess weight that affects many people. In fact, according to the CDC, over one-third of Texans were considered obese in 2019! That’s a lot of people at risk for other medical conditions, including GERD, which is chronic acid reflux.

You may be diagnosed with obesity if your BMI is 30 or greater. Studies have shown that the link between obesity and acid reflux is well-defined. The good news is, however, that the same research shows that losing weight can reduce the frequency of acid reflux.

What Is Acid Reflux?

Acid reflux is a common condition that causes burning pain in the chest and/or throat. Most people call this heartburn and experience it only occasionally. But acid reflux can be more severe when you’re overweight. It can even become chronic, meaning it happens often, and needs to be treated for relief of the burning sensation. 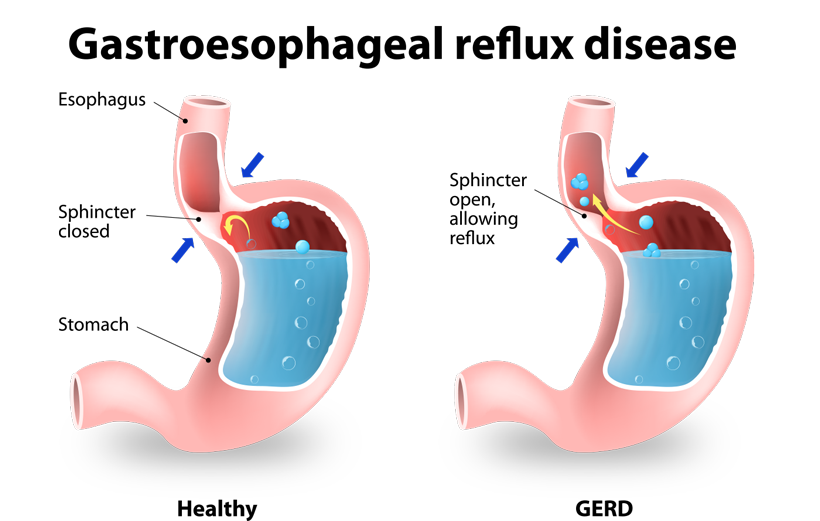 Acid reflux occurs when the lower esophageal sphincter, which is the muscle that connects the esophagus and the stomach, stops functioning properly. When this muscle is working as it should, it opens to allow the food you eat to pass into your stomach. Once food has moved through, the sphincter closes again to prevent the contents of the stomach from flowing backward into your esophagus.

If you have GERD, the lower esophageal sphincter doesn’t close like it should and stomach acid flows, along with some of the food, can flow backwards into the esophagus. This acid is irritating to your esophagus and may cause pain, burning and general irritation. In some cases, vomiting may occur if there is a lot of reflux.

GERD is both uncomfortable and dangerous to your health, ranging in severity from person to person. Some people suffer only mild symptoms and others deal with much more significant problems. Some of the symptoms of GERD include symptoms such as the following a few times a week or more:

Left untreated, the irritation of the acid on the esophagus can eventually lead to cancer in some people.

Multiple studies have shown a clear link between obesity and acid reflux. For example, a Scandinavian study conducted in 2003 showed that people who are overweight or obese are six times more likely to experience symptoms of GERD than people who are not overweight. This association was found to be most significant among women who have used any form of hormone therapy, as well as those who are premenopausal, indicating that hormones may play a role.

This same study showed that higher levels of obesity were associated with more severe acid reflux symptoms. It was true for both men and women, but it was shown to be worse for morbidly obese women.

Studies have also shown that even smaller amounts of added weight can increase the risk of acid reflux or GERD in both men and women. This means that you are at a higher risk of these issues even if you are just slightly overweight. Specifically, a study published in the New England Journal of Medicine found that there is a direct link between an individual’s BMI and their risk of developing GERD. Even moderate amounts of weight gain can cause GERD to develop or become worse.

Several different factors related to obesity may bring on acid reflux. For example, carrying extra weight around your abdomen increases the pressure within the abdomen, pushing the stomach, and its contents out of where it should be. This is commonly known as a hiatal hernia, where a portion of your stomach is pushed through the diaphragm and into the chest, allowing for more acid reflux.

People who suffer from obesity may also have higher levels of pancreatic enzymes and bile, which may cause stomach acid to take on a composition that is more irritating to the esophagus.

Learn more about the health benefits of weight loss surgery.

If you're in the greater Houston area, schedule a consultation with Dr. Howard at his office in The Woodlands to find out if you would be a good candidate for bariatric surgery for weight loss. Be sure to let him know if you’re also experiencing acid reflux, or have been diagnosed with GERD.